Thirty-four parents of students at Drummond Elementary have written a public letter to their fellow parents stating that they will be opting their children out of the upcoming ISAT and encouraging other parents to consider opting out their own children.

The parents emailed the letter to the listservs of all the classrooms in the school on Wednesday, February 19th, saying, “We would rather have our kids engaged in Montessori schoolwork, artwork, independent projects or quiet reading, instead of ‘bubbling’ on a test that that doesn’t count for anything.”

Drummond’s opt out movement is growing by the minute. On February 20th, CTU organizer Matt Luskin will speak to teachers about the ISAT and the organizing efforts around the city. Parents will also be passing out flyers and opt out forms over the next week. Drummond is a public Montessori school with 347 preschool through 8th grade students. 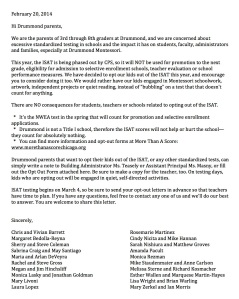